Company History - in the Moving Business for the Last 200 Years

For the best part of 200 years Nat Ross removals has been busy moving company and personal belongings.

Nat Ross has been behind the hall doors of no small number of the above. As the oldest removal company in the south, and second oldest in the country (only Beverly Smyth, who took them over in 1988, is older), they've been at the removal coalface, in one shape or another, for 185 years.

Since 1821, in fact, when Nathaniel Ross set up as a "common carrier" and agent for Messrs Pickfords in Cork city. The British army had a large presence at the time and, in horse-drawn carts and according to the 1925 edition of the journal World's Carriers, Nathaniel Ross "dealt with all cross channel and foreign shipments, as at that period a large volume of traffic from both the Continent and America came through the Port of Cork".

So it went until, in 1881, his 18-year-old grandson, also Nathaniel Ross, took over the business and, according to company records, "opened a coachbuilding department to supply his own business with suitable vehicles . . . single horse, two-horse and three-horse pantechnicon vans". These improved methods of removing soon established him as the premier furniture remover in the South of Ireland.

The young, go-ahead Ross's own design pantechnicon lift vans were "frequently seen in France, Italy and other Continental countries". He was one of the first to adopt motor transport and, when he died in 1925, his son Nathaniel succeeded him in the business. And so it went, through the years until, in the 1970s, Nat Ross moved out of family ownership though not, ever, from the removal business.

Variety is still the spice of the Nat Ross furniture removal business: these days the company moves furniture, and more, around the country and across the world. These days, too, they've branches in Dublin and Limerick, as well as Cork.

Mark Exshaw, company manager in Cork, is a more than fitting teller of the company story. He's been with Nat Ross since 1984, his father before him joined the company in 1960, his brother and sister work alongside him today. "If you're in furniture removal it sticks," he says. "It's such a varied job: I was in a multi-million dollar apartment in New York last week, next week it could be the one room flat of someone who has to move. We'll move someone a few miles, or from Cork to Australia." Variety indeed.

"There's a huge history behind this company," he says, daunted about where to begin, armed with cuttings and anecdote in offices whose walls hang with pictures and fascinating historical detail. Nat Ross is a company aware of its heritage. "We even feature in pantomime jokes every year in Cork," he says. An institution indeed. He's right about the amount of history. Together we go through words written about Nat Ross, peruse any amount of fascinating pictures and, telling their own stories, study "specimens of vehicles".

The early pantechnicon vans, for instance, came in all sizes and took furniture by road, sea or rail. They were mounted on steel springs, with rubber buffers to "prevent oscillation". Lift vans were especially made for rail or sea journeys and a ton lighter than ordinary wheel vans. Lorries, "for one or two horses", were "useful for all classes of bagged goods" and had "patent waterproof sheets". Open spring floats were low on the ground and, used by breweries and single horse covered vans, were "a great success in this damp and variable climate". Patent piano vans "mounted on delicate springs . . . saving time where time is of consequence". Nat Ross had long cars, timber cars, sugar cars, spring vans, coal butts - had, in fact "all the best rolling stock in Cork".

The company knew the value of branding from early on too - Nat Ross is emblazoned everywhere on everything from the beginning. The company's physical presence in Cork took on landmark proportions when, early in the 19th century, it based itself at 2 St Patrick's Quay, with a main storage depository at 5 Lapp's Quay and another at Camden Place. (Much, much later in that turbulent century the Lapp's Quay depository, with its huge Nat Ross sign, would be a backdrop for a remarkable picture of JF Kennedy alighting from his car on a visit to Cork).

Testimonials to the company's diligence, its customer care and reliability, were never short on the ground. In the 1930s there were glowing reports from Africa and the US, all giving "glowing accounts of the perfect conditions in which customers had received their goods after long and arduous journeys by land and sea". The story is also told of "a furniture van that travelled 6,000 miles by sea and 600 miles by rail to Kenya Colony, was unpacked and converted into a serviceable bungalow".

In 1906 one Aylmer Somerville wrote from Wiltshire eulogising the Nat Ross foreman and the fact that "not a single piece was scratched or broken". In 1912 JAF Clegg, Professor of Divinity at TCD, said he been moved from Cork to Dublin "very expeditiously" with the workers "in every respect capable and obliging". In 1954 Nat Ross established a new headquarters on McCurtain Street, set up a Dublin branch and became the first Irish removal company to drive directly to England and Europe.

By the time roll-on/roll-off ferries were the thing, Nat Ross was moving furniture and fine art around the world. Mark Exshaw tells the rest of the 20th century story. "When my father joined in 1960, Victor Ross, the great, great grandson of the founder was on board and the company was still family-owned. Victor Ross retired early, in 1975 when he was 54, and sold to Cork grain merchants Halls and Greenes.

They owned it until Beverly Smyth bought the company in 1988." Victor Nathaniel Ross died in 2004. "I joined Nat Ross in 1984, my father was with the company until 1989," Mark Exshaw explains. His father "moved" Fanny Craddock. "She gave him such a time! We've moved actors, politicians, countesses, lords, sirs - everyone and anyone through the years. The infamous as well, though we didn't know what we were storing until the guards arrived at our door! We have to be careful these days, too, that trucks coming back from the UK and Europe don't carry illegal drugs or such."

Nat Ross moved from McCurtain Street to today's premises on Monahan Road in 1989. "We needed more storage and our vans disrupted traffic - though our lads became very quick and expert in time. McCurtain Street really took off when we left! Now, with things expanding all the time, we have to move again, to a purpose-built facility designed to our own needs. That'll happen in about a year." Things have changed, a lot, in his time with the company. "It used be we'd move bank employees, navy, police, army but less and less. Contents have changed too. Houses are smaller and furniture built-in so there's more packing of goods from cupboards. People want special packaging too. We get companies when they move into the country because of the Celtic Tiger and, when they close down and leave, we get that business too." Business doesn't just come through the door; Nat Ross actively seeks it out. "We watch the press for moves in and out of the county and our sales people here, or in Tallaght, Dublin or Dock Road, Limerick, let companies involved know we're around.

Nat Ross itself employs between 20-25 people, though the group of companies employs about 120. Some of our people are with us 40 years or more." The company never, he says, "rests on its laurels. There's a new generation who don't know Nat Ross so we have to keep networking and expanding. But when all's said and done you can't do better than do a good job - and you're only as good as the last job you do." 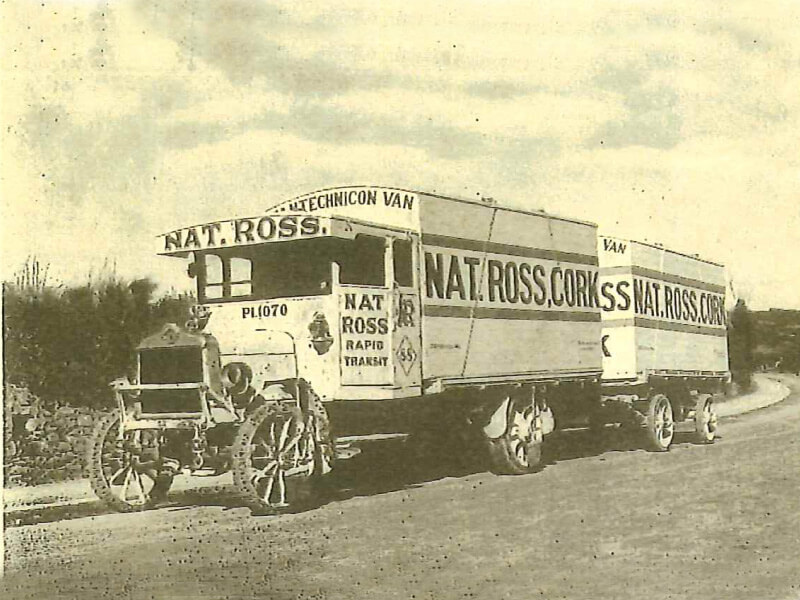